THE THANKSGIVING DECLARATION OF THE GREAT AMERICA PARTY

At the founding of our country in 1776, courageous Americans pledged their lives, their fortunes and their sacred honor to secure liberty from a government that was unaccountable and that denied them rights given to all men by their Creator. On this day dedicated to prayerful Thanksgiving, as we come together as families and a nation in prayerful celebration of our great national experiment, current generations of Americans must resolve, like our forefathers, to resist tyranny and preserve freedom by declaring, and pursuing, a New Founding for this country.

Such a rededication to our Nation’s revered principles specifically repudiates today’s anti-American repression, including:

The evident hijacking of this year’s election through comprehensive fraud, corruption and other misdeeds and errors that, if allowed to stand, would disenfranchise half the country, delegitimize the politicians who stand to benefit from such wrongdoing – and preclude in the future the free and fair elections essential to the operation of our constitutional Republic;

The failure of the Nation’s two dominant parties to represent the vast majority of Americans and their commitment to limited, accountable and truly representative government and the free exercise of our God-given liberties;

The restriction in particular of our constitutionally guaranteed freedom of speech by the cumulative constraints imposed by traditional media, technology cartels and big government bureaucrats and regulations;

The indoctrination of our children by government-dominated educational systems that disinform them about America’s exceptionalism and encourage their embrace of sovereignty-sapping and liberty-crushing ideologies and political systems; and

The manipulative and often contemptuous mistreatment of America’s working men and women by self-appointed elites across the country that results in needless divisions, alienation and economic dislocation, to this country’s great detriment and the benefit of our adversaries around the world.

In response to such outrages, Americans who cherish this country’s founding principles – and who are determined both to continue to enjoy their benefits and preserve them for future generations – commit ourselves to renew the Founders’ efforts to achieve a more perfect Union, one that is: rooted in justice; ensures domestic tranquility; provides for the common defense, promotes the general welfare; and secures the blessings of liberty to ourselves and our posterity.

To reaffirm our shared values and advance these constitutional purposes, we declare today – on the occasion of our revered national holiday of Thanksgiving – the founding of a new political force: the Great America Party (GAP). These are GAP’s principles and purposes:

The Great America Party believes that:

The United States is truly an exceptional nation, conceived in liberty, under God and dedicated to the proposition that all men are created equal. We have a duty to our children and their children to protect and defend her, and pass on a free, secure nation for them to do the same. For our posterity to perform, in turn, their duty, they must be taught to revere the country all of us are privileged to call our own.

The United States is distinguished by its accountable, representative form of republican government established and governed by its Constitution. That document is, and must remain, the supreme law of the land. Its checks-and-balances crafted by the Founders to prevent governmental abuses and tyranny must be safeguarded and strengthened, not weakened and dismantled.

The United States is a federalist system with the powers of the federal government being deliberately limited by the Constitution and those not expressly assigned to it reserved for the States. In particular, it is the unique responsibility of those in state government closest to the people to determine how best to assure the Founders’ first priority: life.

The United States is a nation governed by the rule of law, adopted with the consent of the people by their elected representatives and applied equally to everyone. It is the duty of government at every level to prevent unlawful threats to public safety, property and the Constitution, itself.

The United States is a beacon of freedom and inspiration for others the world over. America’s strength must be maintained so as to ensure that its enemies, foreign and domestic, can

neither extinguish liberty here at home nor preclude its pursuit by our friends who seek it abroad.

To advance these foundational principles, the Great America Party:

To paraphrase the founder of one of the United States’ most important political parties, Abraham Lincoln, the Great America Party looks forward to contributing to unifying and giving voice to the aspirations of Great Americans of every race, creed and background across this country for a new birth of freedom under a government truly of, by and for the people, so that this constitutional Republic, under God, shall not perish from the earth 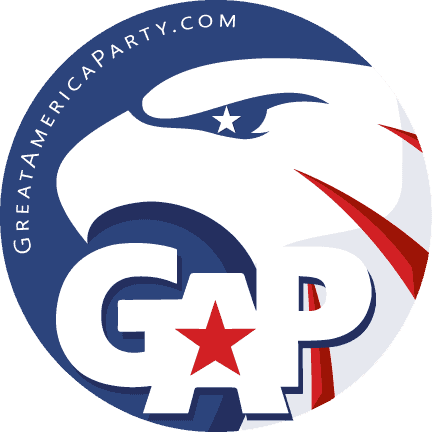 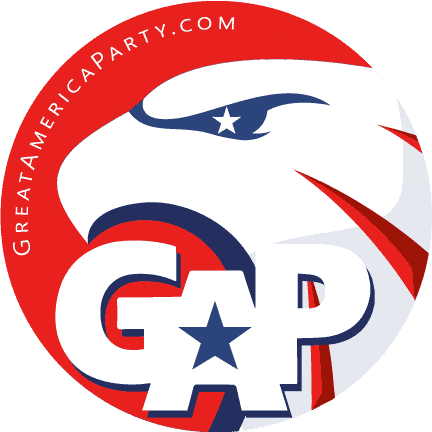