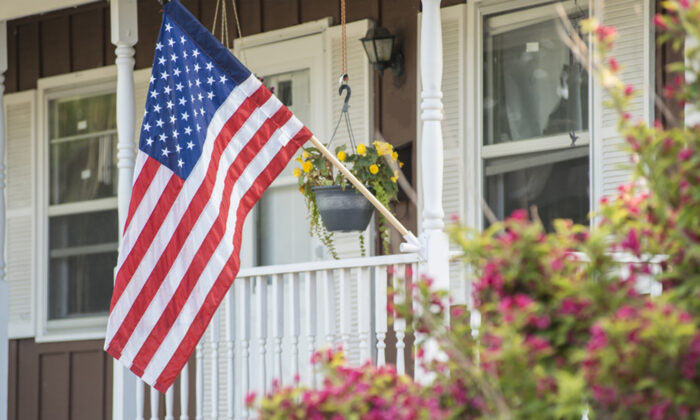 Though I’m a New Zealander, I know America and its people well. I’ve travelled to every state in the Lower 48 and have addressed more than 500 audiences across this amazing nation. My message has always been the same: The United States is heading toward a brutally tyrannical socialist revolution—and if America goes down, every free country follows.

So, what can be done? Can the Republic be saved? Honestly, I don’t know.

However, I can suggest some steps that would at least give this country a fighting chance.

Millions of Americans are still in complete denial. Many think the military is secretly in control—that it’s only a matter of time until justice is done and President Donald Trump is restored. There’s a “secret plan”—just “have faith.” The truth is that Trump was outmaneuvered by an alliance of communists, globalists, and even traitors in his own party. The “deep state” is now almost fully in control.

Trump isn’t coming back into office any time before 2024—if we still have meaningful elections by then.

To make sure they can never be voted out of office, the Democrats plan to enfranchise 22 million illegal immigrants, abolish the electoral college, gain at least four more far-left senators through Puerto Rican and D.C. statehood, and flood the country with tens of millions more third-world refugees and illegal immigrants. They also plan to nationally introduce voting “reforms,” i.e., mass mail-in balloting, abolition of ID requirements, etc. that will guarantee eternal Democratic Party control.

If the Democrats can abolish the Senate filibuster and place at least four more leftist “Justices” on the Supreme Court, there’ll be virtually no way to stop any of this if we rely on traditional political methods.

The military can’t save us, nor can Trump. On the contrary, it’s up to patriots to protect Trump and the Armed Services from unrelenting Democrat/communist attacks.

When enough Americans face the unpleasant truth, then, and only then, can we talk about hope.

Violence will not save America. The harsh reality is that President Barack Obama had eight years to replace patriotic generals with left-leaning political appointees. He did a great job. If violence breaks out (God forbid) the military will stand with the government, not the insurgents.

Does anyone think Russia and China, and Cuba and North Korea and Iran would stand idly by while their Democrat friends are being defeated by a patriotic uprising? They would undoubtedly use the opportunity to finish off their “main enemy” once and for all.

Beware anyone inciting violence online, at a public gathering, or in a private meeting. Distance yourself fast. They will be at best hopelessly naive, at worst government provocateurs.

The left is praying for “right wing” violence. It will give them an excuse for a massive crackdown on patriotic Americans. This country will be saved peacefully or not at all. If significant violence breaks out, it’s over.

Having said that, the Second Amendment must be preserved all costs. An armed populace is at least some check on tyranny, even if useless in the face of biological warfare or nuclear attack. Americans should keep their guns and work every day to ensure they never have to use them against their own people.

If voter trust isn’t restored within months, the Republican Party is doomed. Democrats will continue to vote. Large numbers of Republican voters will stay home. They won’t trust the elections and will refuse to participate. We’ve already seen this play out in the Georgia Senate elections.

Thirty states are currently led by Republican legislatures. Some are already holding enquiries into fixing deficient electoral procedures. Most will be whitewashes unless the public gets heavily involved. If the resulting recommendations don’t include the elimination of electronic voting machines and heavy penalties for organized voter fraud, it’s likely to be a window dressing exercise. Be alert.

Patriots must work to restore voting integrity first in the red states, then the red counties of the blue states—then after 2022, the whole nation.

Get involved in this process. It’s a top priority.

That’s why the Republican base is super patriotic but most of their elected representatives in most states vote like “progressive” Democrats.

Close the primaries, Republican patriots. It will transform your party.

5. Organize a Compact of Free States

MAGA folk need to build a “nation within a nation.” This doesn’t mean secession—Russia and China would be quick to exploit such division. What’s needed is a re-affirmation of 10th Amendment rights as already outlined in the U.S. Constitution. The already out-of-control federal government is about to go on a rampage against every form of independence left in the country. Every red state with the courage to do so must immediately begin working toward a formal compact to collectively oppose all forms of federal overreach.

Such a formal alliance should start with Florida and Texas, then grow by inviting Oklahoma, the Plains states, most of the Southern states, New Hampshire, the free Midwestern states, and the Republican-led Northern and Western states.

Such an alliance, stretching from the Florida Keys and the Gulf of Mexico all the way to the Great Lakes and the Canadian border and even Alaska, would bisect the entire country.

Adding the red counties of the blue states such as Virginia, Maryland, New Jersey, Massachusetts, Illinois, Minnesota, New Mexico, Colorado, Washington, Oregon, and California, would create a voting and economic bloc that Washington would find exceedingly difficult to challenge.

When the Biden administration recently suggested that Florida Gov. Ron DeSantis close all restaurants in his state to slow the CCP virus pandemic, the governor politely refused—citing the ineffectiveness and horrendous economic consequences of mass lockdowns.

The United States is technically a federation of free and independent states. It’s time to fully realize that ideal.

Southern states will soon be reeling under a massive new wave of illegal immigration. The federal government will do nothing to prevent it. Texas, Florida, Arizona, and the free counties of New Mexico and California need to be preparing to defend their borders now. This is not an immigration issue that is the Constitutional preserve of the federal government—this is a state public welfare issue.

Of course, the Biden-Harris administration plans to pack the Supreme Court with more left-wing justices to make virtually anything they want “constitutional.” But this shouldn’t even need to go the courts. State governments already have the power under the 10th Amendment to nullify Federal overreach. They simply have to band together to put Washington back into its constitutionally tiny box.

The Republic will be saved through the courageous application of the First Amendment (free speech) and the 10th Amendment (state sovereignty).

Every free state should immediately embark on the adoption of the “Republic Review” process. There’s a small but growing movement in some Western and Northern states to review their engagement with the federal government to eliminate or nullify all unconstitutional relationships.

Under the Constitution, the states are technically superior to the federal government. They’re sovereign under the “equal footing” doctrine and have the legal power to refuse to engage in unconstitutional programs.

For instance, most states only get about 10 percent of their education budget from the feds—but are almost completely subservient to Department of Education dictates. Why not forgo the measly 10 percent in exchange for a return to local control over all public education? America is losing its youth in the public schools. Every patriotic parent knows that.

If the free states are willing to stand against federal government overreach they must also be prepared to forgo unconstitutional federal money.

A thorough Republic Review audit would soon return power to the state legislatures—where it belongs.

We need an “America First” umbrella group to operate both outside and inside the Republican Party—even possibly within the Democratic Party in some areas.

This organization should be all about pushing the MAGA/America First agenda at every level of government, in every state of the union.

Such a movement could harness the energy of 70 million to 80 million Trump voters without being under Republican Party control.

America First could unite the Tea Party and MAGA movements, grassroots Republicans, patriotic Democrats, and Independents to mobilize tens of millions of voters to transform the GOP into the truly populist, patriotic MAGA party it should always have been.

Trump is already vetting candidates to stand against the Republican congressmembers and senators who betrayed their own base after the 2020 election.

Meanwhile, there are almost 70 far-left Democratic congressmembers in red states. Just restoring voter integrity alone could defeat several of them in 2022.

Running MAGA candidates backed by Trump in every one of those races could flip many more. It would be more than feasible to take back the House in 2022 to make Biden a “lame duck” president.

Patriots should be abandoning Google, Facebook, Twitter, etc. for more honest platforms. They should also enthusiastically support efforts by DeSantis to heavily fine Big Tech operators who “cancel” patriots. If 25 or 30 free states did the same, “Big Tech” would soon be little tech.

Patriots need to organize nationwide boycotts of unpatriotic companies and buycotts for loyal American companies like My Pillow and Goya Foods.

Already, local groups are drawing up lists of “unfriendly” local companies and friendly alternatives so patriots can stop supporting their opponents and spend more with their fellow MAGA supporters.

It would also be smart to sequentially target vulnerable unpatriotic companies.

Imagine if 80 million MAGA patriots resolved to begin a nationwide boycott of one such company starting now. The boycott would go on indefinitely until the target company was broke, or it apologized for “cancelling” patriots. If applicable, every MAGA family could simultaneously commit to buying at least one of the cancelled person’s products this year.

After two or three companies had collapsed or apologized, we would soon see large companies start to back away from the “Cancel Culture.”

Patriots have spending power in this country, people. We need to starve our enemies and feed our friends.

Again, patriots need to build a nation within a nation.

It should be also a given that every American patriot boycotts all communist Chinese goods wherever possible. Check those labels! Buying Chinese communist products in 2021 is like buying Nazi products in 1939. It’s immoral and it’s suicidal.

In December 2020, Trump’s Director of National Intelligence John Ratcliffe revealed that the Chinese Communist Party was conducting a “massive influence campaign” targeting dozens of members of Congress and their aides, including through attempted blackmail and bribery.

Tens of thousands of foreign agents are co-opting unpatriotic businessmen, unethical politicians, and sympathetic journalists in the interests of China and other malevolent states.

Under the Biden-Harris administration nothing will be done to stop these activities at a federal level—but much can still be done by the free states.

If every free state cracked down on foreign bribery, corruption. espionage, and subversion, this country would be transformed.

If hundreds of corrupt academics, journalists, businessmen, and politicians (from both parties) were exposed and punished, this country would soon be well on the way to moral, economic, and political recovery.

What Do You Think?

These steps alone will not save America—but I believe they would be a huge step in the right direction. I will be following up with further suggestions and plans. But for now, I’d love to see your comments, suggestions, and criticisms in the comments section.

Thank you for reading. From a grateful Kiwi, God bless America.

Read more at The Epoch Times